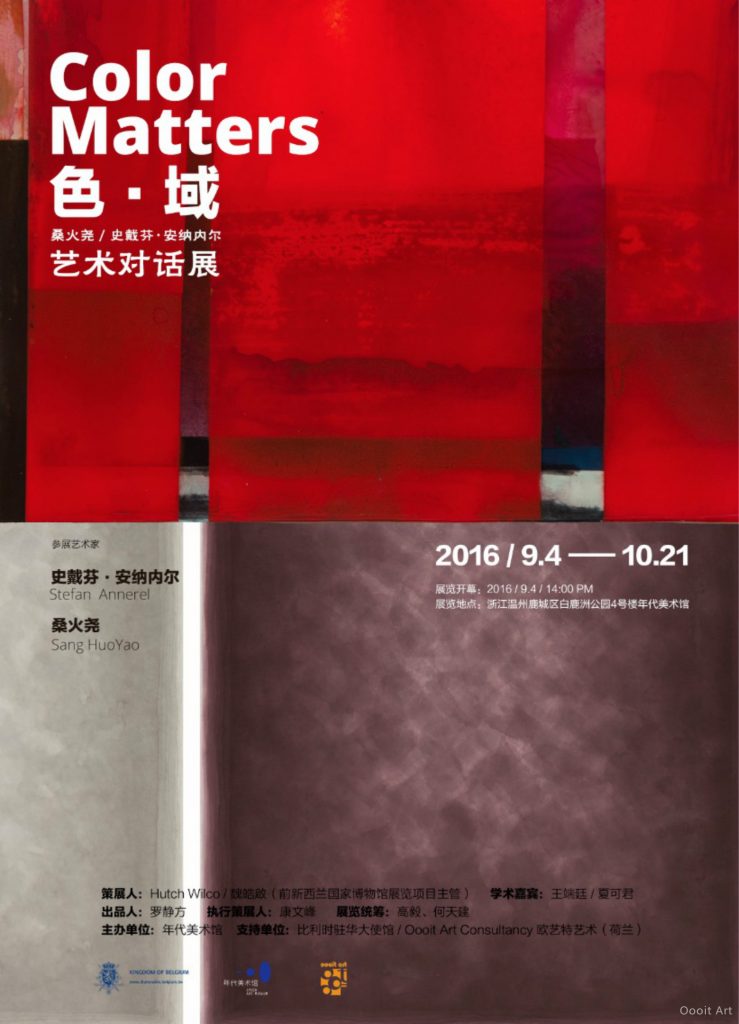 The Matter of Color: The work of Sang Huoyao and Stefan Annerel.

The Flemish art critic, Anne-Marie Poels, while speaking of StefanAnnerel’s work, recalled “I remember this experiment: you repeated a word —e.g. chair or chimney — until it detached itself from its meaning. The wordthen no longer referred to its content: it had become a meaningless item.”

As with the game in which a word is repeated until its meaning is annihilated, at least inthe mouth and mind of the speaker, Stefan Annerel’s works pursue abstraction through a similar procedure.Anneral’s work obsessively pulls from commonsources: cheap textiles, laundry bags, painter’s tape, images from magazines,stock photographs, bathroom tiles, a footballer’s shirt, company logos, andfake timber veneers.

One could suppose that these source materials are cribbed at random, except they are chosen. He then makes a record ofeach, obsessively cataloguing them by making miniscule copies, measuring only afew centimetres square. Each are then applied to a series of index cards, which are then archived. This is the first step towards abstraction, a formula sointricate it resembles alchemy.

Each indexcard then becomes the source for a layering: a ground of timber is selected toreceive a first layer, then a second of paper or cloth, then paint, then afilm, more paint, each distorted, magnified or compressed, reproduced inexaggerated trompe l’oeil, then layered in elaborate and intricate collage,pressed beneath resin, usually on a strict, if somewhat haphazard,horizontal/vertical axis. The whole, separated from its multiple sources,resembles a family tartan, a wholly abstracted pattern. Once prosaic referencescombine in an attempt to distil alchemical purity: pure abstraction.Ameaningless item.

Collageemerged in the form that we are familiar with today early in the twentiethcentury in the germinal constructions of Picasso and Braque, in a then radicalmerging of low culture and high art (although, it is difficult to maintain theperspective today that cubism at that time was also considered a rather lowart) in the continued efforts of modernists to explore three-dimensionality while acknowledging the two dimensional stricture of the canvas surface.Annerel removes this constriction by building up layers as a set of flatmodels– essentially a series of two-dimensional layers result in a threedimensional assemblage, the result of which is a reversal of the Cubist’sdilemma. There is both a depth and a weight which speaks to the assembly ofdetritus pertaining to the twentieth centuries obsession with consumption as aform of therapy for the malaise of the idle middle class.

By comparison, Sang Huoyao’s delicate water ink paintings seem totally unconcernedwith any allusions to the contemporary, political, social, or indeed the concrete world – there is neither horizontal or vertical axis, no vanishingpoint, no indelible illusion to the natural elements, nothing that woulddelineate a pond, a desolate tree, or a pier over a body of water (as with Mondrian’sComposition 10, Pier and Ocean, wherewater and structure are reduced to a series of minimal, broken lines which,while utterly reductive, still spoke to their natural inspiration. Even thismost basic means of representing three dimensional space is denied Sang, who said, “…contemporary water ink paintings must focus on planes, not lines…”).Indeed, if there is any influencefrom the natural world, it seems microscopic.

His paintings appear as if a gossamer tissue dipped in ink was repeatedly laiddown, if only for a fractional moment, over and over, on a bed of white, untilan inky impression remained on the whole, lighter in the centre than at theperimeter, which is then delineated by a soft brush. Aesthetically, they readlike multiplying organisms in a petri dish, a bacterial kaleidoscope, perhap saided by being painted on silk, which gives the whole the effect of being litfrom within, creating a subtle, oscillating quality of liveliness. If Annerel’spaintings can be described as constructions, then Sang’s may be calledcreations.

It barelyneeds mentioning that Sang’s work is obviously a product of Chinese traditionalink painting and its emergent experimentalists of the late 20thCentury, but it also owes a debt to Manet in its reduction of pictorial spaceto a flat plane, acknowledging little more than centre and margin, usually invariegated hues of grey. It also owes a debt, perhaps most immediately, to the minimalist color fields of Mark Rothko, specifically in the restrained paletteif not the manner of application.

“We are for the large shape because it has the impact of the unequivocal.” wrote Rothko and Adolph Gottliebin 1943. While Sang’s works compete in scale with that of Rothko’s, his inkyrectangles do not assume the ‘large shape’. Indeed, Rothko’s rectangles appearmanifestly architectural, softly merging with the main ground, whereas in some of Sang’s works,his gossamer planes float upon a bacterial soup, in others, the yappear in the process of breaking down, dissolving or entangling – it is tempting to suggest that Sang has taken Rothko’s words regarding abstract forms being “organisms with volition”, and rendered it true – perhaps moving beyond the bacterial, to the molecular, to the quantum.

While both Annerel and Sang can be said to be, in the Western canonical sense, Abstractartists, any attempt to unify their work in a wholly cohesive way should be resisted, in as much as it would be to draw a long bow to make concrete parallels between Braque and Rothko, or Mondrian and J.M.W. Turner. Instead, it is perhaps more helpful to look at their work as being at the two ends of a particular spectrum, from the micro- to the macroscopic, from the sublime to the prosaic.In this sense, they can be said to be at once reaching the proportions of the‘large shape‘, while also flatly dissolving into meaningless items. As when one looks from a very far distance, or much too closely, the form and matter blurs,and one is only left with the matter of color.