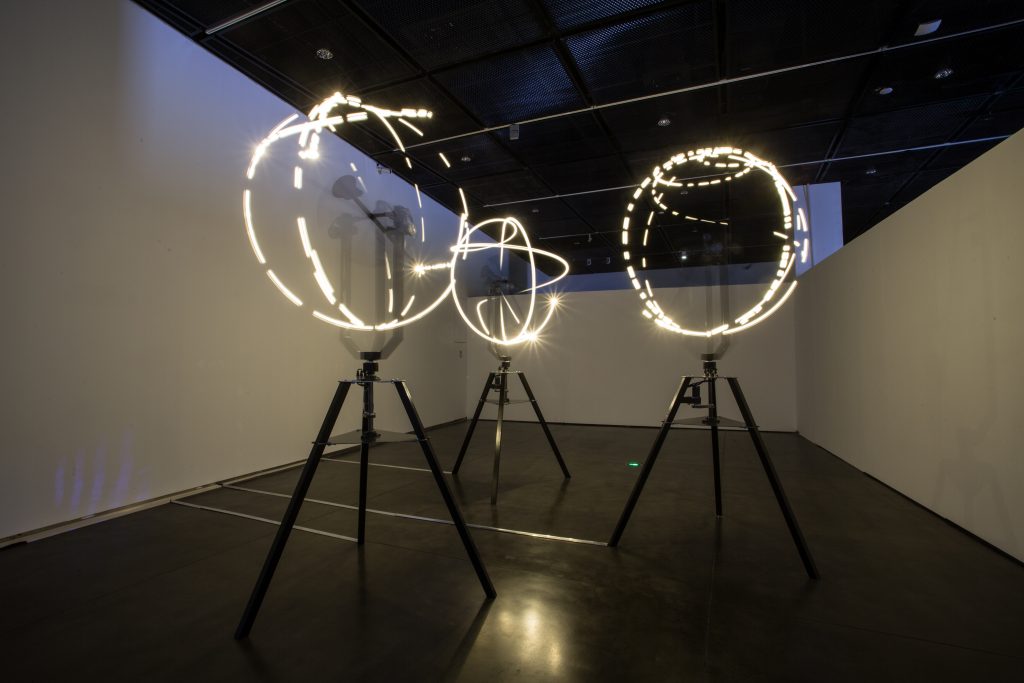 Exhibition Melody of Motion presented ten recent important installation art works from Macular Art Collective. These works elaborate generative compositions in movement, music and sound, and light and further to challenge different sensory experience of the audience. In this series of works, audience has the opportunity to listen the voice of the inner life of bacterium in a nano scale, or based on the neural networks technology to influence the robotic installations’ behavior of interpretation of light, sound and movement through feedback loops. Interact with sound and melody and motion, abstract color and light created spectacular patterns, these patterns in return created visual music. These works encourage audience to continue the research about sound, motion and light visual limitation and the process that happen at the microscopic level and the cosmic scale, enjoy the atmosphere like beautiful dazzle aurora with mysterious immersion and enter the illusory universe.

Macular is an initiative of a group of artists who share a collective interest in art, science, technology, and perception. The members of the collective collaborate on the creation and production of multi-sensorial artworks that are presented at media arts festivals, galleries, and other arts institutions around the world. An important part of the initiative is that the collective functions as a nomadic lab in which the members do research and develop the technology and theory that’s needed in order to create their works.

One of the ongoing research topics is the creation and manipulation of emergent systems and the possibilities for composition that arise from them. Besides showing these systems as installations, they can also be seen as instruments for live performance, where the performer and/or the audience becomes part of the system. Another field of interest is the notion of musical thinking and the way concepts of musical theory can be inserted into other media in order to create generative compositions in movement, light, and sound.

In doing so, the artists aim to create their own abstract language that is mostly based on rule-sets within self-built systems. This development happens through constant interaction between the works and the creators. The pieces are shaped and transformed throughout the process. With this in mind, Macular aims for a minimalistic aesthetic through a continuous exploration of the basic characteristic properties of the media they use. Whether they are cultivated systems or natural phenomena, the medium gets stripped down to the essence of the medium itself, showing only what is necessary to perform the composition.

Joris Strijbos was born in 1981. He got Master degree of Music from Royal Academy of Art & Royal Conservatoire, the Hague, Interfaculty ArtScience (Image & Sound). He won the STRP Talent Pit Award in Eindhoven in 2010 and Rene Coelho Prize in Amsterdam in 2010.

Mattijs Munnik was born in 1989. He is graduated from KABK Den Haag, and finished one year residency in Rijksacademy Amsterdam in 2016. He won the Prix Cube Award in France in 2013, Rotterdam Design Award in 2012, and Designers & Artists 4 Genomics Award in 2010.

Nicky Assmann was born in 1980. She got her Master degree of Music & Fine Arts in Royal Conservatoire & KABK, The Hague. She was nominated for the 2017 & 2015 Prix de Rome and her work Solace gained an Honorary Mention in the 2011 StartPoint Prize.

Daan Johan was born in 1981, he got Bachelor of Fine Arts and Master of Music in Royal Academy of Art & Royal Conservatoire.

Eric Parren was born in 1983. Hot got his Bachelor of Fine Arts in Interfaculty ArtScience in Royal Academy of Art & Royal Conservatory and Master of Fine Arts in Design Media Arts in University of California Los Angeles. He got Prix Russolo 2017 (nomination) International Competition, Most Discussed Film Award Short Movie Club in Minsk in 2017, and File Prix Lux (nomination) in Sao Paolo in 2010.