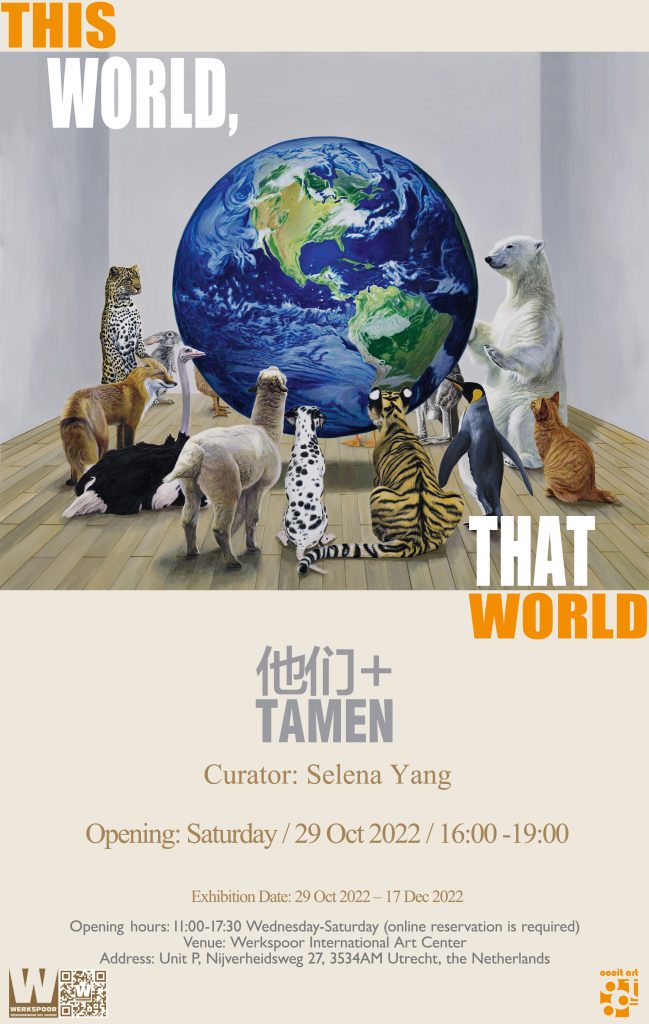 Exhibition “This World, That World”

The Chinese word ‘Shi Jie (world)’ is originally derived from the Buddhist concept of a universe (लोकधातु lokadhātu) made up of time and space. In the old Western languages of Greek and Latin, the word “world” first contained a sense of “order” that encompassed both the order of nature and the of human behaviour. The discussion of “world” in the English language brings up complex topics such as its uniqueness or plurality, its different definitions in science, philosophy, theology and religion. Even though the English and Dutch languages are etymologically homogeneous and the word “world” originally referred to “human age”, the modern Dutch interpretation of the word “world” is as simple and pragmatic as the Dutch: the world is an anthropocentric definition of the earth, not of the earth itself, but of human civilisation as a whole, such as nations, cities and the internet. So it seems that although the most literal interpretation of “world” in all languages can broadly mean all reality or everything in general, when we talk about the world in depth and in different contexts, our starting point may be different, the discussion may become ill-focused, and the world we are talking about may not be the same. This talk is inherently contradictory and colliding, but contradictory and colliding may also bring us closer to the whole picture of the real world.

From the very beginning, the “TAMEN” art group ( LAI Shengyu and YANG Xiaogang) chose to work in this contradictory and collision mode, refusing to see the world from one person’s perspective or to create art in a fixed focus mode. The canvas is a place where two people talk and painting is their way of communication. They create things in the big world with their playful and witty artistic language. The two perspectives make their creative images more unpredictable. Conflict and contradiction themselves run through the whole process of their work, so that social and realistic topics are strongly expressed in their works by dramatic visual images. It is the direct dialogue between the images themselves that is their working method and focus, a method they have maintained together for 20 years since graduating from the Central Academy of Fine Arts. They chose ‘TAMEN’ (in Chinese: They) as the group’s name in an attempt to seek a system of free transformation between subject and object, thus blurring the boundaries between the viewee and the viewer. The exhibition, This World, That World, selects 42 oil paintings and prints from four stages of their 20 years of creation. It is an opportunity to present, study and observe their work, and to experience their youth and growth, their collisions and encounters, the rapid development of society and the interaction of Eastern and Western cultures.

“The Same Room” is the earliest known series of works by the TAMEN. It is about the relations between the world inside and outside a window. In a two-dimensional way, this series of works shows a three-dimensional world by exploring the changes in the city, the collision of Eastern and Western cultures, the relationship between modernity and tradition, and the interaction between people through the window as a fixed installation in the composition. While the individual works have a dramatic tension, the juxtaposition of multiple works creates a cinematic film-like surreal documentary narrative.

The series “Lost Paradise” is composed of giant works up to 10 meters wide, a kind of transformation from looking at the world from a window to being in it. The city is like a giant stage, when the curtain is suddenly opened, there are magnificent crystal chandeliers and also dust that only the sunlight can reveal. Landmark architectures of the big city are mixed with crumbling walls, which makes one wonder: has the rapidly developing society created for this generation an edifice for the mind or a collapse for the soul? The works in this series are their most direct and profound reflections on this era.

The “Ferry” series embodies a universal humanistic concern and a more global view of the world. It’s a reflection of the spirit of ancient scholars in the East, a concern for the future and the common destiny of humanity in a world affected by epidemics, wars and natural disasters.

The “Meta-Universe” series is a quiet response to the current hustle and bustle of the virtual world. It creates a range of scenes of art museums and art institutions, but replacing the viewers with animals. Seemingly absurd and bizarre, they challenge and subvert our conventional understandings of the world. Artists’ work is curated by professionals to enter museums, so can artists curate directly on their work? At a time of rapid technological development, when we are discussing whether artificial intelligence is conscious and whether it is allowed to be conscious, just as we default to the anthropocentric definition of the world as Earth, we define the meta-universe as a digital virtual world that can interact with humans. But what if we look at it from a non-anthropocentric perspective? Do artworks that are symbols of human civilisation still have value? Their work seeks to explore and question the role of humans and human civilisation in the world of the Meta-Universe.

Their painting style is influenced by the Surrealist master René Magritte and the Neo-Realist master Edward Hopper, but they never stop at presenting a single image or a single emotion. If you put their work from each period together, they look more like a montage film from canvas. What’s shown in their paintings, be it real or unreal, is reimagined with a sense of scenography and storytelling. The Eastern cultural attributes of their work are clearly visible, with a keen sense of time and space in the Chinese language of ‘world’. But they have also stepped outside the limits of Eastern culture and philosophy, remaining sober and honest in the face of the contradictions and conflicts of reality, and always being rational in addition to their sensibility. At the same time, the theatricality and even the absurdity of the images that emerge from this continuous and unrestricted dialogical creation is their way of confronting conflict and an attempt towards democracy on canvas. The time and space that they slowly unfold on the canvas is a unique method of artistic experimentation. It is precisely what touches people emotionally: the world on the canvas is perhaps the place which connects everyone’s world, the real and virtual world, this world and that world.

TAMEN is an art group founded by artists Lai Shengyu and Yang Xiaogang in 2002. The two artists were born in Hunan Province in 1978 and 1979 respectively. They both graduated from the Central Academy of fine arts majoring in printmaking, and both received bachelor’s and master’s degrees.

Their works were included in following publications:
2017, “Thirty years of Chinese performance art” by Zhu Qingsheng, a famous art historian and professor of Peking University;
2016, “History of Chinese oil painting” by art historian Liu Chun published by China Youth Publishing House;
2014, selected as “100 contemporary artists in the world” by the Chilean art magazine “arte al limit”;
2013, the English and French editions of “the History of contemporary art in China in the 21st century” published by Charta press;
2013, selected as “25 contemporary Chinese artists you must know” by the University of California, Berkeley;
2012, “The next generation: young Chinese artists”, published by Prestel, German publishing house.Selected as the cover and back;
2010, “The history of Chinese contemporary art: 2000-2010”, compiled by Lu Peng, a famous curator and art critic.