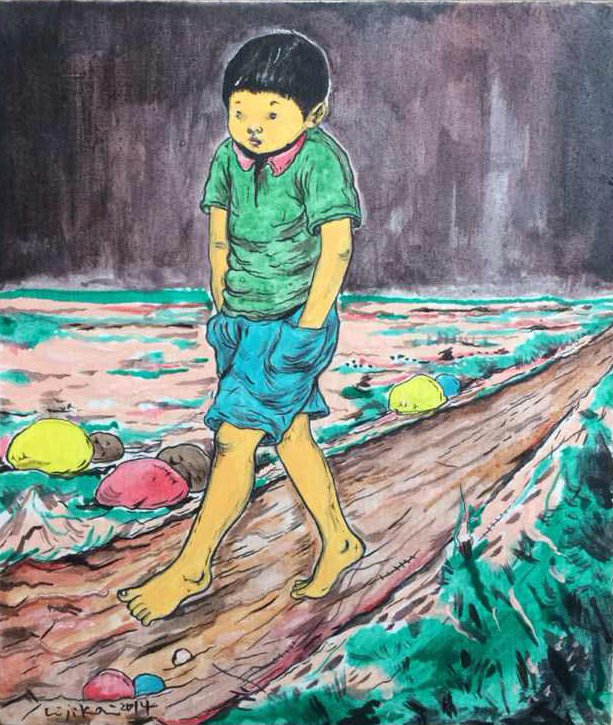 Interest in contemporary Chinese art is growing steadily. People are becoming increasingly curious about what is going on in that country in the field of modern visual arts, hidden behind the wall of cultural and spiritual differences. Due to our preconceived notions, we Westerners tend to focus our attention on the stereotype aspects of Chinese art, such as the Terracotta Army, the Ming vases and, much later in time, the grinning figures from Cynical Realism and Chinese Pop art. As if in the Netherlands we would judge Dutch art only by our Golden Age genre paintings, the tight structures of Mondriaan or the turbulent colours of our Vincent van Gogh, while there is so much more. It would definitely be worth the effort to enrich our knowledge of each other.

An open and curious look at each other

With sometimes unhealthy eagerness we here in the west read spicy stories about successful Chinese entrepreneurs who cause the prices of modern art to go through the roof. Each year the TEFAF Art Fair in the Dutch city of Maastricht enthusiastically opens its beautifully decorated gateway to Chinese guests. That is excellent. But we suspect that there is so much more there too. What is going on across the breadth of the Chinese art world? How do artists cope with the rapid economic developments, the emergence on the world stage and the increased openness to the outside world? How do they handle their amazement and curiosity? Artists will be able to provide answers to these questions through their visible and tangible creations. One of the purposes of museums and galleries is to facilitate the meeting of artists with the general public. That is also the main purpose of the present partnership between the Wuhan Art Museum in China and the Jan van der Togt Museum in the Netherlands. We will be able to enjoy each other’s art and learn from each other. This exchange of tastes may also involve inconvenience, which is healthy and even one of the functions of art: having an opinion on it which may differ from someone else’s.

Contemporary art is dominated by influences from the West. These influences in turn originate from a melting pot of various inspirations from the past, present, and definitely from the Far East as well. Deciphering this DNA will be a rewarding, fascinating and continuous object of study for art historians. From an (art) historical point of view, I would venture the proposition that the artistic interaction between East and West will lead to an interesting enrichment of the stratification of art productions on both sides of the globe, which will result in a substantial deepening of relationships.  Such cultural interrelationships are of great value, as long as the respect for the originally different starting points is maintained. The aim of the partnership between the Wuhan Art Museum in Hubei Province and the Jan van der Togt Museum in Amstelveen is to contribute to this cultural enrichment. The partnership intends to demonstrate that, as far as the visual arts are concerned, the historic words of literary Nobel laureate Rudyard Kipling: “East is East, and West is West, and never the twain shall meet’, are in fact based on a misunderstanding. The mind of an artist is like the wind. It blows across national borders, mixes in the higher and lower air systems and provides us with the weather conditions and the artistic climate we live in. The history of art shows that such exchanges lead to growth and innovation.

The exchange in the short term

The partnership between the two museums has tentatively resulted in the planning of two exchanges. In the winter of 2014, works of the Chinese artist Li Jikai will be exhibited in the Dutch Jan van der Togt Museum. Reciprocally, works of the Dutch artist and photographer Paul Huf will be exhibited in the Wuhan Art Museum in China. Both artists have had successful exhibitions in their native countries, including in the museums involved in the partnership. Hopefully more exchanges will follow later. The exchange was made possible through the mediation of Selena Yang of Oooit Art Consultancy, who due to her education, Chinese roots and activities in the Netherlands is familiar with the art world in both countries.

International setting and a warm welcome for Chinese artists

The management, Board and staff of the Jan van der Togt Museum are pleased with the partnership project. This partnership is not only important for the museum, but also for the metropolitan conglomeration of which Amstelveen is a part. Cultural exchanges between China and the Netherlands are valuable because of the new knowledge and insights regarding contemporary Chinese art they provide to the Dutch residents in the region, the broader international community in general, and residents from the Far East in particular. Many people from abroad have taken up residency and work in the metropolitan region of Amstelveen / Amsterdam. Amsterdam Airport Schiphol, the international seaports and many other museums are all located in the relatively close proximity to the Jan van der Togt Museum. The works of the visual artist Li Jikai will receive a warm welcome in the museum.

Li Jikai, visual artist——Who is Li Jikai and how should we interpret his art?

The works of Li Jikai can be seen first-hand at the Jan van der Togt Museum. My advice would be to go and see them first. In the museum you will be able to form an opinion that is not biased by the well-meant but initially less important opinion of others. In this short contribution I shall limit myself to a broad outline of the person Li Jikai and of the context of his works. I would prefer to whet people’s appetite rather than giving them my opinion. Nevertheless I would like to give a first impression based on studying the works of Li Jikai that were available to me and those that I was able to find on the Internet. I am definitely intrigued and I am very much looking forward to seeing the paintings that will soon be on display in the Jan van der Togt Museum.

Maintaining an unbiased view as long as possible

When confronted with relatively unknown art, it is important to proceed without bias as long as possible. At that point you are still highly receptive to impressions that differ from existing frames of reference. That goes for me personally too. I am not a connoisseur of modern Chinese art, nor of Chinese art of bygone days. Visits to national and international art fairs and galleries where more and more modern Chinese art can be seen, already provide some level of recognition. For an inquisitive mind however they still remain relatively superficial. I studied contemporary Chinese art to some extent for a recent contribution I made to a book about the Chinese painter and sculptor Qiangli Liang, who works in the Netherlands part of the time, entitled: “Symbolen van verstilling” (Symbols of Stillness, Amsterdam, 2013). When I look at the works of Li Jikai I do not only recognise differences, but also fascinating and mysterious similarities between the two artists. Is my Western tainted, somewhat extroverted view the reason why I tend to attribute this similarity to the introversion in their works? The works of Li Jikai possess an explicit depth, similar to the depth I encountered in Qiangli Liang’s works. Beneath the surface of their canvases you sense the presence of hidden meanings, which are difficult to assess. The works of Li Jikai deserve not to be interpreted using easy cliché’s. Neither do they deserve to be interpreted in a manner that reflects our own answers rather than his. Suspension of disbelief keeps the attention focussed longer. It prevents you from rapidly jumping to conclusions and believing you already know de answers.

Li Jikai is an extremely versatile artist. The breadth of his works is striking. Although there is a considerable amount of variation in his stylistic features, the concealed depth remains a recognizable constant factor. The diversity of his works allows for a wide range of references to the international artistic in-crowd. In this respect Li Jikai is fully up-to-date, and apparently well aware of what is going on in the international art world. Inner depth is determined individually and this power of individuality enables Li Jikai to preserve his personal signature in his works. If one had to label him, he would fall, as far as his age is concerned, into the category of artists who have fully experienced and are still experiencing the phase of increased prosperity and economic and social growing pains in China. This so-called ‘ego generation’ is attributed qualifications that can purportedly be recognised in their art, ranging from decadent, lazy and superficial to alienating, unbounded and disorientated. In my opinion, none of those qualifications apply to Li Jikai, because individual autonomy remains his main motive. It is this autonomy that determines what is relayed from his head, through his heart and hands onto the canvas.